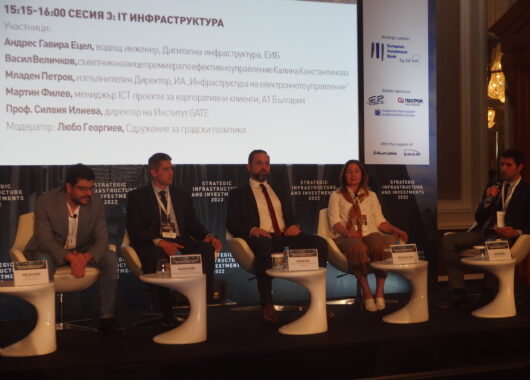 GATE Director participated in a debate on IT infrastructure

IT infrastructure has a direct bearing on the quality of life, even in a village. This was the conclusion reached by the participants in the IT infrastructure session at the “Strategic Infrastructure and Investments 2022” conference, in which the director of the GATE Institute, Prof. Silvia Ilieva, took part. The event was organized by the City Media Group in partnership with the European Investment Bank and was held on July 7 at the Balkan Hotel, Sofia.

An overview report of the European Investment Bank on investments in the development of IT infrastructure was presented at the session. Representatives of the state administration and business took part in the subsequent debate together with Prof. Ilieva. The challenges to the development of a single standard for achieving cyber security in state institutions were discussed. The issue of centralization (in information or data centres) and decentralization of the data storage infrastructure has caused controversy. It was noted that private companies are solving this problem by using cloud services in addition to their data centres. “The data that has a greater degree of security should be protected with us, and those that are not can be distributed to avoid their more expensive maintenance,” noted Prof. Ilieva. She introduced the audience to an initiative at the European level, which starts from large companies and is related to the creation of a data space. In it, under certain conditions and standards, based on protocols, data owners can share data with others. “In this process, the most important thing is trust,” emphasized Prof. Ilieva.

During the debate, the topic of the human factor that must protect the IT infrastructure was also touched upon. It was noted that not only high pay attracts good specialists. “In our project for a city digital twin, young people are inspired by a cause – this is the ambition to create the digital twin”, pointed out by Prof. Ilieva. And she added that the Institute gives researchers the opportunity to work with data and technologies that they would not have access to in other settings.

The debate ended with the recognition of the role of IT infrastructure in the successful functioning of many other infrastructures and in the quality of people’s lives.